Game of the year

After an extended break, my blog returns with an award for game of the year. There is little doubt that this was Nashlen Govindasamy's game against visiting GM Sahaj Grover, played in round 3 of the South African Open, on 15 July 2017. The game was broadcast live and attracted considerable interest, mainly because of some brilliant sacrifices, and the feeling that Nashlen was beating the GM. You can download the game here with brief notes by myself. 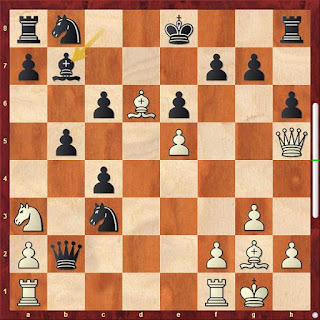 Nashlen could not have expected the GM to go pawn grabbing on move 7, which makes the Rook sacrifice (diagram above) on move 15 absolutely brilliant. He must have found 15.Rfb1!! over the board, rather than preparing it at home, as a similar sacrifice has only been played once before in a master game. By move 19 all the engines concur - Black is dead lost! I'm not sure why Nashlen spent so much time on his 19th move (nearly 34 minutes) as he dearly needed that time later in the game. On move 20 he consumed another 23 minutes, leaving him just 11 minutes plus increments to make the time control. All went well until move 27, when White missed two easy wins, then tragically blundered on move 28 with less than a minute left on the clock. This could have been the game of Nashlen's life, but alas it was not to be. It is hard to defeat a GM!
Posted by Chess KZN at 15:48