I watched the movie "Pawn Sacrifice" on DSTV this morning. This movie chronicles the life of Robert James (Bobby) Fischer, up to the point where the American chess genius became world chess champion in 1972. The blurb says it is "based on a true story" but the number of glaring historical errors really annoyed me. I know a lot of the incidents really did happen - just not when or where they were depicted in the movie! 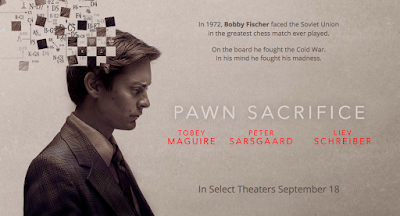 Much of the plot centres around Bobby's rivalry with Russian champion Boris Spassky. One large chunk of the movie was set in Santa Monica, California, where the Piatorgorsky Cup took place in 1966. Boris is described as "world champion" in the movie, but we all know that Boris didn't become world champion until 1969. Another example of an historical boo-boo was the supposed first round incident, where Bobby beat a strong Russian master, after arriving extremely late at the board. That never happened - he actually played against fellow American, Sammy Reshevsky, and drew his first game. Almost a year later, Bobby famously arrived 50 minutes late for his game against the same Reshevsky, then proceeded to beat him. That was at the Sousse Interzonal of 1967, so they got the date wrong, the country wrong, the opponent wrong, and even his nationality wrong. Does artistic licence have no limits?

Having said all that, Tobey McGuire did a good job of portraying Bobby Fischer, and the movie is well worth watching if you are a chess addict. There is little doubt that Fischer was psychologically troubled from early childhood, and that his behaviour got worse over time, but was he really as crazy as portrayed in this movie? Fischer did a lot to revitalise interest in chess in the West. The amount of coverage of the 1972 match was absolutely staggering. I remember seeing chess on the front page of our daily newspaper for the first time, and membership of chess clubs rocketed in the early 1970's because of the Fischer effect. RIP, Bobby Fischer.
Posted by Chess KZN at 12:04